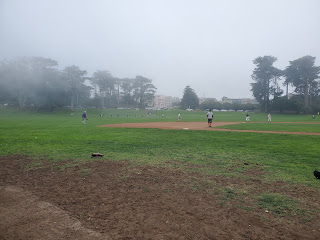 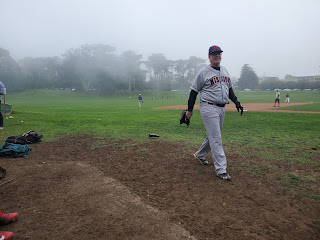 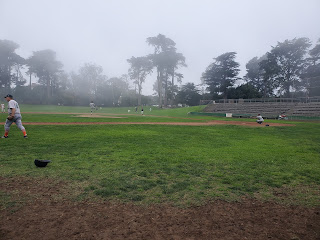 Yes, Carl (the fog) had his way with the MBC yesterday, and man, it is a weird thing to hit a ball in the air and have it disappear.  This was to be my last game before a 3 month hiatus and hopefully successful surgery.  I wanted to go the full 9 again, make a CG hat trick for my last three games, and my team was nice enough to oblige.

What was newsworthy was that we had 22 players, instead of 13, so their yielding the mound was actually a big thing, since I did not sit out as I should have.  Thank you all!  Sean started for the homers and he was pretty lights out the entire time.  He had a nasty diving curve ball working, and he kept us to one run over 7 frames.  We had a team of a lot of veteran players, and it quickly became apparent that we did not have the speed in the game.  There were so many plays at 1st that usually would not have to be as bang bang as they were.  Seriously, every time there was a ground ball, the batter was STEAMING up the line, and we had one shot.  Luckily we had Urano at SS, who converted those plays, as did Nick S at 2nd.  Adam was a great 1st baseman, including one short hop scoop that had to be caught.

So we cruised along, making some great defensive plays, including a double play, and then Carl got heavy, and we lost one in the outfield, and then another, and then one in the infield.  The runs piled up, and we just could not get our own offense started.  We left a runner in scoring position most of the innings, and only scored one more run, off of Mitch who came into mop up.

* Thanks to everyone who came out, it was a great way to end my year, with a well-attended friendly game

* Thanks to Greg who caught a great game, and stopped a couple of absolute scuds.  Bob, Don, and Rudy also did great behind the dish

* The visitors hammered the left field line all day

* Carl was doing one thing well, and that was helping the knuckleball, man it was dancing and diving all day!

* I lost track of my directive, and took a comebacker and spun and threw it to 2nd, because I thought there was still runners on 1st and 2nd.  Turns out it was just 2nd, but I got the runner off base too far and Urano gunned him out at 3rd.  Glad that it worked out, that is not the usual MBC out, we play the safe game.

* The return of the band!  All is forgiven, they explained that they had intentions of playing for both games, but were not able to.  We will be keeping an eye on them, nonetheless.

* I didn't mean to pick on Rudy, but he got the K business.

* I struck out on a ball in the dirt, one of Sean's diving specialties, while protecting the plate.

* JT had a real nice hit

* I hit James with a knuckleball, it was coming so slow I think he never moved

* I may have had 5 Ks on the day, which is more than usual

* Poor Nick W was all over the map in left field

* I am in pursuit of Johnny Bartlett's record of 4 complete games in a row, I can't find it yet, but I think there is a blog post about it somewhere.  I think the record was set at Camp Swampy.

Great game had by all, thank you all who played, there's no where else I would rather be on a Sunday. 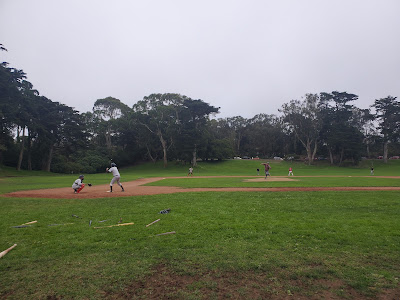 What a cold foggy affair.  We could all hear our taxes getting burned up in the sky, as the roaring Blue Angels were heard but not seen.  We managed to get enough for a game, but out of the kindness of our stupid hearts, we agreed to let the league game before us play their last inning, which they insisted in part, was because it was a super close game.  So we did, and 30 minutes later, and several runs scored, the game still wasn't over.  Hmmmm.  So, we took the field quickly and got to it.  Satch for the homers and HR for the visitors.  And for the second week in a row, I threw a complete game.  It felt good, and not too much soreness today.  HR was pitching well, had a very sneaky curveball that was lights out when it was working.

The homers drew first blood to the tune of 2 runs, and the visitors answered back with 1.  Then we answered back again with 2 more, and....the visitors did not.  I place the reasons solely on our defense, which was awesome all day.  Kenball in left field made several tall man catches, Mike N at 2nd, and Nick at SS (for the first time, as far as I could tell) were locked in.  Lynch made his usual picks at 3rd, and Gaspar and McG were walls behind the plate all day. Alejandro came late, but filled in at all positions.

HR gave way to Chris Powell after the first 3rd, and Chris was pumping strikes, but his loss at SS is always the downfall of his presence on the mound.  Lattig finished the game for the visitors and Greg was a stalwart behind the dish all game.  I think the visitors had at least 2 double plays on the day.  It was a weird game for hitting, a lot of bloops that fell in or balls hit straight to people.  Our baserunners were fooled by things that looked like they had to be hits, only to be caught.  The visitors also had the lil'est player of the day, a young boy with a very long Italian name.  I want to say Lucciano, but that may be wrong.  He tried real hard, and hit the ball well, got on base, and almost caught one in right field.

In any case, the homers stretched the lead to 6-2 towards the end of the game, and we started to play for outs any cost.  We were helped by a couple of balls that barely went foul, and one squibber up the first base line that stayed fair until Nick picked it up while standing on the bag.

The visitors made an attempt for a comeback, but it was too little too late, and the final score was 6-4.

* Kenball with 3 RBIs and as many, or more, running catches in left field

* James had a semi-tough day at the plate, and to break it up, he hit left handed his last at bat.  He smoked the ball, but it got to center too quickly and I was out at 2nd.

* Poor Loren got a workout in left field, against his wishes

* Fuck the band.  They have thrown us over for the Olde Tyme league.

* I don't think I struck out a single person, but I did have a 4 pitch inning.

* Mike N may have had the deep drive of the day, but there were several contenders

* We did get Powell in a pickle and pulled it off successfully.

* Mike N also took a hard ground ball right in the sternum, and still managed to make the play

* Lynch smoked a ball to right 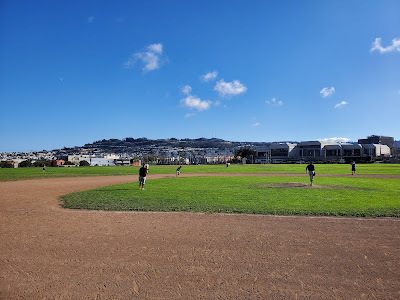 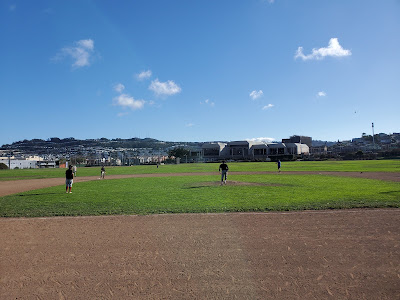 Summer has come to SF!  A beautiful sunny day in the city, and enough people to play a game, who could ask for more?  Sean and I went head to head, complete game style, and while I will say that I felt like I threw a decent game, the score would not agree with me.  The mound at Cop Field is an abomination, and we should do something about it.  I will stop there.

The teams had a real seesaw battle for the first few frames, 1-0, 2-1, 3-2, 4-4.  We thought this was going to be the way the whole game.  But no.  In addition to pitching well, Sean and crew hit a few gappers that cleared the bases, more than once.

The force I didn't think I would have to reckon with was Marcie.  She put wood to the ball every at bat, and had 2 hits and 2 RBIs on the day.  While I didn't feel great about it, we picked her off at first on a heads up play by Anna, who moved quickly to the bag and watched me as I delayed long enough for Marcie to lull to sleep.  I gotta take the outs wherever I can find them these days, but a big cap tip to Marcie on the day, not to mention a great catch she made in right on a sky ball.

Our scoring dried up completely, and the visitors kept tacking on runs.  Craig, a Scotsman who had only played cricket before, got steadily better over the course of the game, and put a hurt on a lot of balls that were way out of the zone.

The night is coming earlier, and fall is in the air.  The last 2 innings were a struggle with the sun so low in the sky, but we made it.  I struck out looking on a ball right down the middle to end the game.  My team tried to form a rallying cry that the pitch was low, since a backwards K is no way to end a game. It wasn't, though, it was perfect, and I froze up.  I own that, and hats off to Sean for throwing it on a 1-2 count.

* The visitors put in the work and made the plays

* Sean pitched a hell of a game

* My team didn't ever fall apart, the scoring was all legit.

* Brad, in center field, made a couple of great catches

* Lynch likes playing 3rd, so we swapped SS as a fill in.  As Sean said, My team is doing pretty well for not having a shortstop.

* Marcie's grunt with her first hit was a powerful one

* Lynch swung at a 2 strike pitch that was around his eyeballs and hit it squarely to the opposite field.

* Greg and Nick W also caught the whole game, congrats to them!

* My hitting was schizophrenic all day, I had a nice long single to open, and then I struck out, then I got robbed on a frozen rope that Powell somehow caught, then I hit a weak groundball that I lazied up the line and might have made it if I had been running, then I struck out again.

* Anna had a challenging day at 1st, there were several throws that pulled her off the bag and into the baseline.

* Lattig brought him out and he and Craig seemed to have worked out a mutually beneficial program for not catching each others fly balls when filling in on defense.

* Sean laid out for one as did Alejandro, but neither quite made it.

* My curve ball was not working.  Then in the 7th, everything stopped working for a bit and I threw 9 balls in a row.

* Powell had our biggest hit, and scored at least 2 of our runs

* Adam showed up late and gave me a real battle in a 2 strike count, I think something like 7 foul balls.  He finally got a nice single.  Turns out, Greg told him that it was a 1-run game when he came up to bat, when in fact it was a 7 run game at that point.  Adam took it to heart apparently.