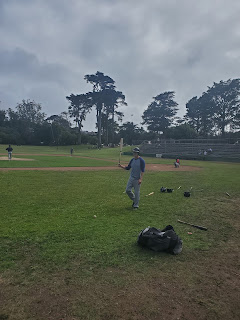 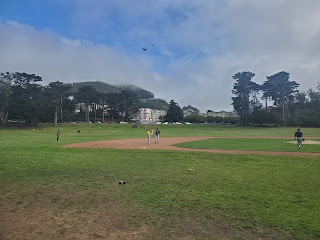 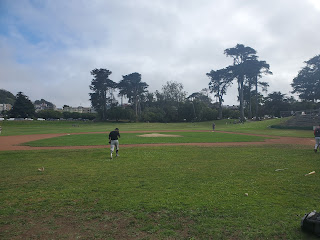 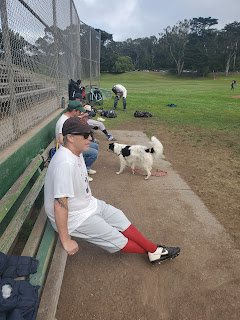 We had all the park to ourselves it seemed, the AIDS quilt-- which Anna reported was the world's largest communal art project--was on display at Robin Williams meadow.  Over 3000 pieces were out, one of the largest showings in history, and it looked very well-attended from what I could see.  Needless to say, it also made parking a little more complicated.  No olde tyme games, so we had the big field, and quite a few spectators over the course of the game.

13 players this week, another Havana 6+1 affair, with Lattig as all-time first baseman.  That was very kind of him, I don't know if that was him being a gentleman, or hurt, but we appreciated it.  Nick W started for the homers, and Sean for the visitors.  They both were pitching well, and helped by a solid defense, so much so that the score was a paltry 1-0 for the first few frames.  Then we tacked on a few, then the homers roared back, then we scored a few more, then the hoers really roared back and took the lead.

We had decided to play 7 as usual with these scant attending games, mostly because we don't start until 3:30 usually, and it is a chore to cover both sides through the game.  Going into the 6th, the homers had tied the game at 7, and Sonny had taken the duties from Nick.  Sean handed the ball off to Satch, and we were back to an even game.  Not for long, as the homers scored a go ahead and we headed into the final frame down 8-7.

Rojas, leading off, tattoos a triple to right field, scores easily on Sean's hit, and then Sean is batted in on a double by Satch that was mostly thanks to the sun in center field.  But, we took the lead, and the homers were unable to get the needed rally going in the 7th.

* The homers had at least 3 double plays

* All the catchers- Bob, Chris L, Don- did a great job of blocking, which makes a difference at the GGP field,

* Powell also made an insane over the shoulder catch in left field from the SS position.

* The last play was so smooth, Tony Rojas barehanded a bouncing ball up the middle to throw out the runner at 1st.

* The homers strung together 4 extra base hits in a row at one point in their rally.

* The humid weather makes for enjoyable pitching, everyone was dealing

* The fill-in defense was sharp on both sides

* While playing 2nd, I have to do a better job of holding the runner, per Coach Rojas.

* Bob got a blooper hit to right and yelled at me while he was running, since I had frozen in between 1st and 2nd (there were two outs....)

* It would have been a great day for the band to come out, but they are AWOL. 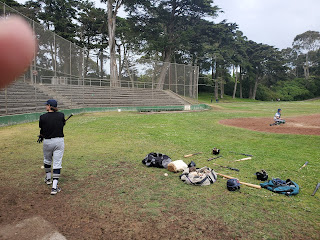 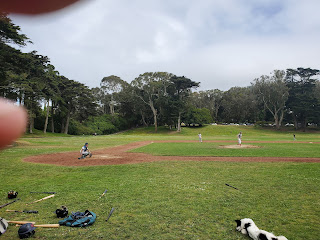 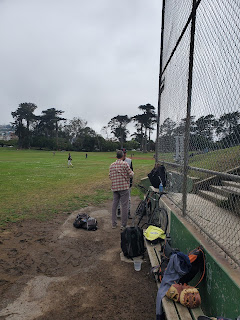 A weird, humid day.  The rain in the morning must have been more than we saw in the East Bay, since there was actual moisture pooled in some areas.  The olde tyme guys were still playing despite the wet, and that seemed to be enough for us to rally a game.  Unfortunately, we only had 12 players show, so another game of Havana 6's, with the updated rules of 2 outfielders and 2 defense fill ins.  The home team was a little stacked, I must say: Powell, Sean, Bob, Mike Lynch, Tony and Satch.  The game was not a runaway though, as we feared it might be, and in fact a nail biter of sorts.  The visitor squad had youth on their side, with Zach, a high schooler, Gaspar, Anna, Adam P, Sonny, and HR.

With a late start and short players, we decided on 7 innings and Satch was set to throw the first 4 an bow out.  However, luck and good pitching weather were on my side and Sean encouraged me to keep throwing, as he had thrown 9 the week before and was not super amped to get in.  I had some very nice sub-10 pitch innings, as well as a few Ks.  The knuckleball in particular was really nasty, helped by the thick and humid air.  Bob was my battery mate, and stalwart behind the dish for the whole game.

Sonny started for the visitors and was also throwing good, but we managed a run early, and held that lead for most of the game.  The visitors got one back, and we added 2 more and that was all the scoring done.  The momentum shift of the game was a bases loaded, no outs situation, that we managed to get out of in about the 4th inning, cap tip to the defense on that one.  Zach came in for the visitors for the final inning and struggled a little with control but got through it.

The game ended early enough for me to get home and be lauded for not being gone too long.  That's a win right there.

* It's a good feeling having Tony and Powell as your up the middle duo.

* The knuckler was dancing!

* Greg came out and provided moral support, he is looking good and even picked up a bat, just picked it up, nothing else...

* Sean was thrown out being aggressive taking 2nd, by his own teammate.

* HR is killing me with the right field shots, a reverse Gaspar shift is in order

* I induced about 9 infield pop ups

* Bob missed a foul pop up and then caught the 2nd one, that's what we do.

* Tony with the line drive catch, double off first play.  As he said, you play baseball long enough, and you can make that play in your sleep.

* I think the visitors had at least 2 double plays, I had to start he first one, filling in at SS.  That sucked.

* Gaspar had the worst sounding ping hits of the day, and a really nice catch in center

* Sonny was muscling the ball to the gaps all day, and had some extra umph on his fastball.

* Tony smoked the longest single in recent history, over HRs head in left.

* Thanks to everyone who made it out!