An amazing day for a game, perfect weather, exactly 18 players (eventually) and what looked like a good matchup.  But for some reason, though the homers lineup was formidable on paper, we couldn't hit our way out of a paper bag.

A lot of the credit needs to go to Sonny, who for 9 innings kept us off balance, hitting pop flies and weak grounders.  You do that, and your defense makes the plays, you can't lose.  His team also turned a legit double play, which was awesome, if you weren't the team trying to build some momentum.

Satch was out and hoping to get a good workout to keep the arm limber, and sweat out the dastardly poisons as a result of a late-night 3-generation poker game.  The results of my poker game were a lot like the baseball game, unfortunately.  But it felt good to throw, and other than the hard hit balls, and the wobbly defense, myself included, it was a good outing.

Chris Powell continued to rip me apart, much like his last outing, where he had several extra base hits.  I thought that if Powell was the only player allowed to score, which is always a foregone conclusion, the score would remain close enough for us to have a fighting chance.  Well, it kinda worked.  He scored a lot anyway.

The game wasn't a blow out, but when you hit 19+ balls in the air and they get caught that doesn't leave a whole lot of chances to score.  Sonny and I shared a few really tight short innings, 5 pitch kind of affairs.

The 9th inning came and we tried to mount a comeback, I leaned in to a pitch, took it off the arm and took my base, howling and rending my teeth to sell it ( I would like to thank the Academy), Greg took his walk, and there we were suddenly with the bases loaded for the first time in the game, and Nick W coming up.  He took 4 straight balls, but chose not to take his base, something we all were a little confused by.  But we trust our players.  From 3rd base I said, "You are going to feel pretty dumb when you pop out to 2nd base."

And then he popped out to 2nd base.

Although technically, Liam dropped it and them got the force out at 1st, but still, pretty amazing right?  Maybe I can market my self as the Picayune Jerk Psychic.  I can only psychically predict when small, shitty things will happen to you.

We had kept the game moving so briskly, that by the end, it was only about 5:10pm.  In our stupidity, we proposed an extra inning, just for fun.  I trudged out to the mound for the 10th, and felt settled in. 3 runs later, it was not quite such a good idea.  And our turn in the bottom of the 10th, we fared no better against the new pitcher, who had a 1-2-3 inning.  Yay.

* A lot of new faces, which was nice to have since we actually had enough players for once

* Somewhere there is cell phone footage of me attempting to pick up a weak ground ball with my bare hands and failing, about 8 times.

* Big thank you for John Mcg and Liam for making the late arrival to square us at 9 a piece.  It makes a difference!

* Nick W. made a fine catch in left field but the best part of the play was that he didn't try and throw the ball afterwards as he was spinning and tumbling.  There has been an uptick in little league throw-arounds lately in the MBC.

* We had Mitch in center field, and I don't know if he made a single out.  That is a waste of talent

* We had a new guy at SS, who made some great plays, and looked like he had the capacity to hit well, though he suffered along with the rest of us.

* A real new guy, Jeremy, played for the first time since 1997, and held his own for being out of the game so long.  I did strike him out with a change-up that was a grade a certified dick move, as Greg pointed out.  It was also completely necessary at the moment, which Greg also pointed out.

* Jimmy broke a cheap bat he got at West Coast Sports and is not faced with the unenviable task of going back there and trying to buy a new one.  You just never know if it's going to be a good experience, or a really trying, soul crushing one.

* Liam was nice enough to swing at a knuckleball for strike 3 that was around his eyeballs.

* I celebrated a little too much after we successfully carried out the Gaspar shift.  I think it was the relief of not another bloop, in a day filled with them.  But I apologized to Gaspar afterwards.

* One of the longest foul balls I have ever seen was hit, either by Don or Chris

* A ball was popped up behind the mound, and I went after it, knowing that it was going to fall in between the defense, and as I called it, Greg commented, "I don't think you do." He was right, but we got the out.  Real time, real talk.

* We had Chris picked off twice, and both times Adam was sure that he had caught the ball, but no.

* I did manage to finish strong in the regular game, striking out three of the last four batters I faced, including Mr. Powell.

Hope this late summer weather continues for another week. 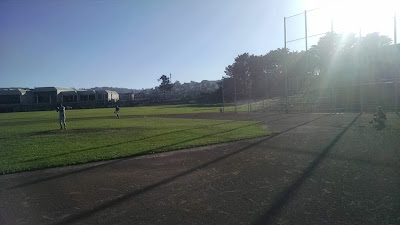 It is official.  The Mission Baseball club is experiencing a drought of players.  We thought it was just the summer doldrums, but it's October now, and we had 10 players show up yesterday.  Sure a few of the regulars had legitimate excuses but even counting them, were are barely 15.  I am not helping the cause any with my own spotty attendance but for fucks sake, we need some new blood.

The field was in amazing shape, so good that we almost didn't want to set foot on it until we had a team.  We approached the Mexican teams that were having batting practice on Camp Swampy, but they wanted nothing to do with us.  We asked a father and son that were practicing in left field, and they were excited to play.  Ended up being the best thing we did all day.  Javeed and Janier were both excellent, especially since one of them was a 10 year old kid.

So we ended up with 6-6, also known as Havana 6's if I am not mistaken.  No one sat on the bench for more than a minute or two the whole game, and we played with two outfielders and all fields open.  Tony pitched for the visitors and Satch for the homers.  It was a pretty low scoring affair, given the holes in the defense, the visitors were ahead for the entire game, but the homers slowly chipped away at the lead.  We scored first, but then went silent for several innings.  Tony is currently unhittable at times, he struck out quite a few of us, some more than once.

We entered the bottom of the 9th (which was really the 7th or 8th, just to get on with it) only down by a run.  I had a spectacular O-fer going, struck out the first two times, high pop fly, another pop fly.  Tony got me in the hole 1-2, and I was determined not to strike out on the Uncle Charlie again.  I reached out about 3 feet off the plate to get the ball and wristed it right between SS and 3rd.  Finally!

I was forced off on a fielders choice but Elvin got on, took second, and was hit home by Don to tie the game.  Bob stepped up and in true AOY style, hit a ball to right field where no one was playing and the game was ours.

Not a bad little game for such an ugly showing.

I am not going to harp on no one showing up because it doesn't seem to work, or that our email has about 100 people on it and we can't get a full 18 regularly but if you are reading this, better start asking your friends about playing, we need warm bodies.  If you are a once in a while player, start making it more often.  If you are a stranger who enjoys a quality and friendly game of baseball, let us know.

* Tony threw another excellent game, new iteration of the player the SS/CG pitcher.

* Thanks to Ed and Bob for catching in addition to playing defense.

* While we are on the topic, Ed let a fly ball bounce right past him while filling in center field for us, which scored 2 runs.  Suspicious behavior....

* Janier had a legit hit to right field, as well as making several good defensive plays at 2nd.  His last hit was a line drive straight back at me, which I luckily caught in my glove rather than my face. Gamer!

* Wes Phelps was cheering us on, sharing his seaweed snacks, and napping in the outfield.

* We turned a legitimate double play in the early innings!

* Elvin played well at 1st, scored the tying run and stole and almost slid into 3rd...

* Nick W scored our first run, and appeared to be suffering from the fall out of hustling for the rest of the game

* I think Tony joined me in being anemic at the plate

Well, hope some people are inspired to come out and play, we could use about 6 more regulars.