The Mission Baseball club is known....

I was perusing the April SQ News and got to the baseball section.

We are a force to be reckoned with in SQ, in case anyone was wondering.

I also like that we are The Mission.  Full stop.  Hopefully we can live up to the hype.... 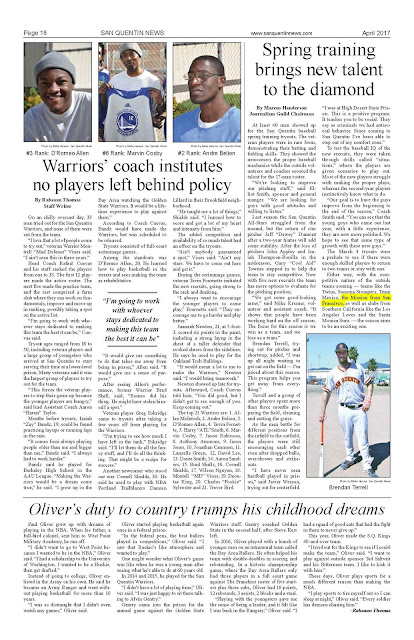 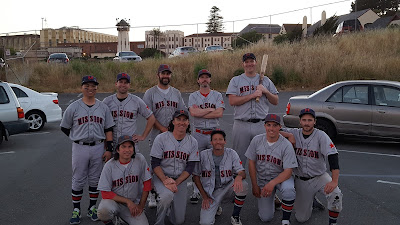 Always a good feeling to get back to prison, said the entitled group of baseball players.  It was, though, and an added bonus that some of the players that we have grown to know are approaching release dates, and ready to re-enter society with the aim of starting to give back to the community.  We wish them the best of luck, and hope that they keep those ideals in mind during the transition.

Unfortunately our entrance was delayed by a bureaucratic get-together, so we didn't hit the field until about 5:30.  That gave us just about two hours to play ball.  We warmed up as quick as possible, and got to playing.  In a stunning change from our usual self-imposed hit like our hands are tied to our shoes, we put up 4 runs in the first inning.  We were helped as well by an umpire who didn't call every pitch 5 inches around the zone a strike.

Sean started for the MBC and looked good.  His breaking stuff and cutters were keeping the team off balance.  They scored 2 runs back in the bottom of the first, on some legitimate hits, the next inning they got another one, and then in the third, I screwed everything up.  I was playing first base, and Sean picked a guy off, with a runner on third, who happened to be Ruben, one of the best all around players that SQ has.  He was just waiting for me to throw the ball so he could break for the plate, and before I realized it, I had waited too long to get the ball in front of the runner.  Safe at second, Ru stayed put, and the next batter scored them both on a single.  FUCK! (is what Sean said in his mind, and I said out loud.)

We entered the fourth down a run, and though we threatened, no runs scored.  I entered the game to try and hold the line, and at least I was able to do that.  1-2-3 inning, punctuated by the strike out looking.  We came back to the dugout ready to do battle.

The fifth inning it all came together.  With some nifty baserunning, we scored the tying run off of the new pitcher, and with the bases empty, I hit my third single of the game, took second on Sean's single and as I was leading off, the count 2-1 to Don, the pitcher tensed then...ALARM, ALL INMATES DOWN.  Crap.

So the alarm announcement in San Quentin is in place to keep check on the inmates when anything anywhere in the prison goes awry.  It can be a fight.  It can be someone tripped on the stairs and hurt their ankle.  It can be a door wasn't closed properly. The idea is that until any situation is cleared, all inmates remain exactly where they are so that the order and integrity of the prison can be maintained.

10 solid minutes we all sat there waiting.  The ALL CLEAR was sounded, and the game resumed, however, the stoppage had screwed the pitcher all up.  He walked the next two batters, and I came home to give us the lead, 6-5.  I had time to high five the bench, take in that we had the bases loaded and ALARM, ALL INMATES DOWN.  Double Crap.

We sat there for the remainder of our time,  waiting while something somewhere was being attended to.  Eventually, Elliot, the SQ coach called the game since we had to be processed out by 8:00pm.  We didn't even get to shake hands with the team, since the alarm was still in effect.  We waved and said Thank you.

As we marched up the hill the ALL CLEAR was given, and with a communal sigh of exasperation, we turned once more to the SQ Giants, waved and said "We'll settle this, next time."

Not the sort of thing you routinely want to be saying on a prison yard, but for us and the Giants, it's just business as usual, good clean baseball.

* An error-less affair, which is very uncommon for us

* The players did a great job rehabbing the field, helped by the real winter we had.  The infield now has grass and everything!

* Chris made a couple of outstanding plays at SS

* Chris was also robbed of a stolen base by an egregiously bad out call at third.

* The SQ runners will steal bases not a matter of if, but when.

* We did a good job of hitting the cutoff man, and not wildly flinging the ball around the diamond.

* Tim played a solid third base

* Carter took one in the ribs, cementing his place as the Bob 2.0

* Mitch might have had the hardest hit of the game, line drive to left center.

* A lot less K's than we usually have

* We broke 2 of the bats that the SQ Giants have, hopefully the rules will change soon so that we can start bringing in our own again

* I got a ground ball three steps to my right, then had to turn and race for the bag.  The runner was about 230lbs.  I am, what I am. I managed to get to the bag first, but the collision would have been severe if it had happened.  This is a hypothetical animated look:

* Don blocked a couple of pretty honest pitches in the dirt.

* Claims were being made by the base runners that Sean was balking on his pick off move by crossing his back leg.  Here is the MLB rule:

(a) The pitcher, while touching his plate, makes any motion naturally associated with his pitch and fails to make such delivery; If a lefthanded or righthanded pitcher swings his free foot past the back edge of the pitcher's rubber, he is required to pitch to the batter except to throw to second base on a pick off play.
The NCAA rules states:

SECTION 3 A balk shall be called for the following action by a pitcher:

l. From the set position, if the entire free foot or any part of the stride leg breaks the plane of the back edge of the pitcher’s rubber and the pitcher does not throw or feint a motion to second base or pitch to home plate

Thanks to all that showed up: