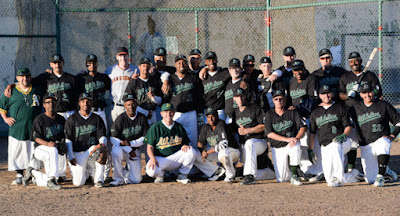 We were among the 38 wins that were compiled by this team over the last year.  They played great defense, they had timely hitting, solid pitching, and the best home field advantage a team could ask for.

In all seriousness, the Mission Baseball Club is always happy to play (and lose) against this team, few people know that a few years ago the CDC officially became the CDRC.  That stands for California Department of Corrections and Rehabilitation.

And sports as a rehabilitative strategy is a great way to teach leadership, sportsmanship, humility, team-building, learning to lose, personal growth, empathy, and pride in one's self. 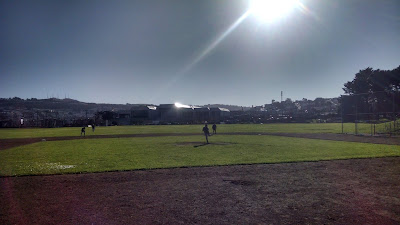 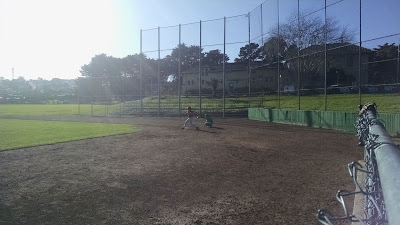 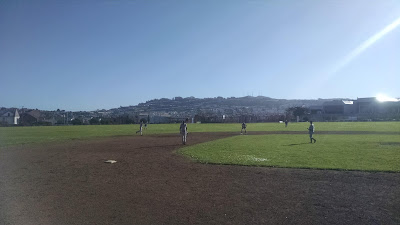 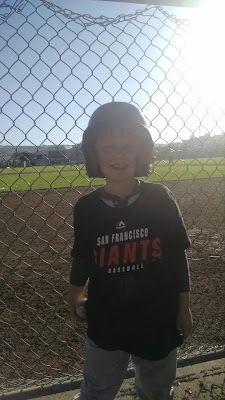 Glad I was able to get out there, and I brought along the little little one, whose interest in baseball has swelled exponentially in the last year.  He did a great job, fielded second base behind Greg for a few innings, and by his count had 3 doubles and 2 HRs.  More on that later.

We also had a plethora of players which was nice for a change.  I had to defer pitching since I was on daddy duty and didn't want to leave him stranded on the bench, learning all sorts of new curse words for 9 innings.

Sean started for the homers, and HR for the visitors.  Let me say that Sean was dealing, the benefit of having had 6 weeks off with the weather lately.  At least 4-5 Ks in the first 3 innings.  His changeup was absolutely nasty as well.  HR held strong for two innings and then handed the ball to Mitch, who had been traded for me, when it was discovered that our team didn't have anyone else that could pitch, the assumption being that I was going to eat as many innings as I could (a reasonable assumption, normally).  Mitch settled in and threw good ball.

Sean continued his dominance, and the score was 5-0 through the 4th.  After 6, he called it quits, and suddenly the visitors took the game in hand, thanks to one very long, drawn out inning.  My little guy started the rally with another double, and chose to stay on the base and be a base runner.  He came around to score on Mitch's lead off triple, and I heard tell that the visitors were happy to count the run.  Chris Powell had come in as the new pitcher, and could not buy a break.  That being said, the visiotrs also hit ball after ball into places where there simply was no way to field.  Gaps, tweeners, no-mans lands, they had them all.

When the dust cleared, they had gone ahead 8-5.  It was suddenly a game, though not much of one.  We homers really didn't mount any comeback, and the rest of the game felt fast-tracked, and over before we knew what was going on.  Sean went to find a puppy to kick, and the rest of us went home....

* Mitch might get the MVP for the bat, the arm, and the dynamite play off the mound to get a ground ball I hit

* The outfield yielded 0 bounces for any ball hit out there, just splats

* I didn't strike out, and even got a hit, though it was a footrace between JT in right, and me down the first base line to see who could be slower.

* Bob's outfit was tight and bright

* We came out of the gates so good, and then lost it all in the second half of the game

* John O and his son are looking to be regulars, which is great to have some young blood again.  they also brought out a hitting cage and tee that my little one used extensively

* Greg was fresh back from a surfing vacation in paradise