Two in a row, how could I be so lucky!  And did we have a great turnout, yes we did!  The final count was 27 players, which is afar cry from what we have had in the last few months.  The day was beautiful, and Johnny Bartlett came out of the woodwork, summoned by Greg to help bolster up the numbers.  A perfect day.  Also our first daylight savings game, at 1pm.

Greg started for the homers and Sean for the visitors, another classic match up.  There was no scoring, and one hit a piece for the teams through the first 3 innings.  I took over in the 4th and continued to keep the scoring low, though I did give up two runs.  We scored one back, and then with my second single of the game, a passed ball, and a double steal(!), we tied it up with a Gaspar hit to the awkward part of the infield and then went ahead for good.

The amazing thing with so many players is that we still have trouble getting nine to the defense, partly because everyone is trying to be considerate and make sure that they are sitting enough to give others playing time.  But it is strange when you have 13 on a squad and you are hollering for a left fielder.  It is also impossible for people who don't sit to hide for too long, since the defense effectively changes every position every inning.  You will be found out and shamed!

A harrowing moment in the later innings, Mitch hit a topper in the infield and raced up the line.  The hurried throw forced Liam to reposition his feet at first and Mitch's lane to the bag was cut off, and he rolled his ankle pretty seriously as he stretched for the corner of the bag.  He got up and walked, but with a pretty severe limp.  He later sent us this picture, nasty sprain, get well soon Mitch! 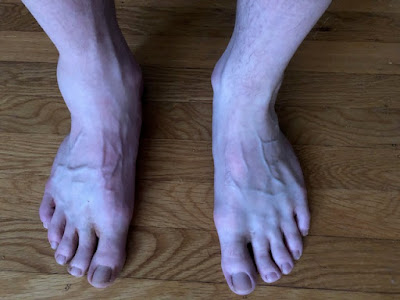 A watchful reminder that we all need to try and keep it safe on the base paths, our most serious injuries and near misses have been in moments like that (Ed's broken arm, Johnny's broken glasses, Jay's trucking of Will R., Elvin's refusal to slide....).

The game went quick, Chris P took over for me, and then Chris L, then Mike N.  Sonny took over for Sean, and we finally figured out the mystery of hitting Sonny.  Don't know what exactly, but we didn't do as terrible as usual.  Regulation time ended in a 4-2 game, and we played on, given that we had so many reserves.  The visitors kept on trying but couldn't get any closer to to tying up the game, and after 12 innings, we called the game complete.

* So nice to have so many people!

* Great to see Johnny and Richie, back from extended absences.

* Bob popped up a first ball knuckleball.  That was my highlight.

* Thanks to all that donned the tools of ignorance, through extended innings.

* Not a horrible defensive game, it's fun when the teams are evenly matched, as reflected in the low score.

* Urano was not the offensive powerhouse that he usually is

* James went to his algorithm, but it failed to pay off, and his innings sitting out were noted in the defense.

* Only for MBC veterans: I am convinced that Gabriel and Casey might actually be the same person.  If he ever puts on the catching gear, that will be the test.

* Thanks to all those who have been carrying the gear, and getting permits, it has been more diverse lately.

Hope for another good showing this week!