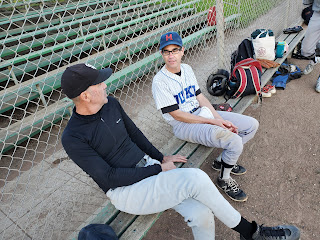 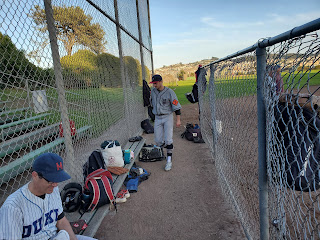 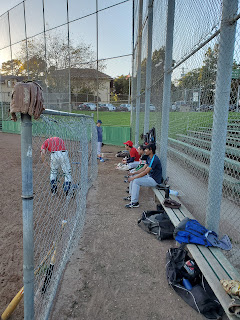 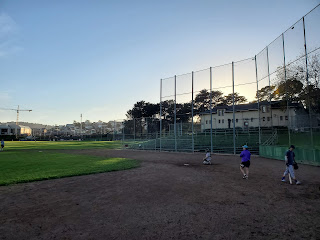 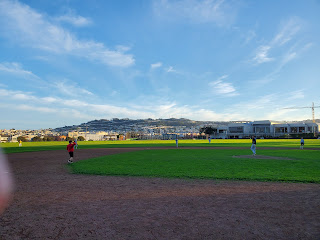 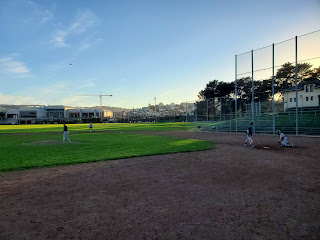 Great game, well staffed, Lattig reported that it was apparently 2 people at 12:40, and 16 people by 12:55.  Beautiful day, warm in the sun, but a brutal sunset for the left side of the field.

Sean and I had warmed up and discussed a head to head match up, but by the time we finished, Powell was on the mound ready to pitch.  Missed that window.  So we changed the plan, placed ourselves on the visitors, Sean started and I relieved.

I have to say that the pitching was really good for the whole game, especially the homers. Powell kept us to 1 run for the first several innings, Dan came in and was also locked in, and HR has a great outing as the 2 inning closer.  Sean had some trouble keeping the ball down at the beginning of the game, but he worked it out and finished strong.  I was throwing batting practice fast balls that must have been looking like cut fastballs or something, because I was getting a lot of swing-throughs.  The change up was definitely working, and I think I finished the day with 4-5 Ks, much more than I have been averaging.  Short innings was the main goal of the day, as it seemed like the first 2 innings took forever!

There was an abundance of lefties out, each team had them all bundled too.  Phelps, Dan, Mike Lynch, JT, Elon, and New Nick for the homers, Lattig, Gaspar, Sean for the visitors.  We think that we also had all the Mike's of the MBC.  Two new faces, Carlos and Armando played with the visitors, and were great.

There were two double plays I think, and we noticed that there was an upgrade at SS when Powell stopped pitching.  That being said, Dan did a great job tracking down some hard hits during his stint at SS.  A heads up play from Lattig at first managed to get us the elusive 3-6 "tag" double play, which I cannot remember the last time I saw out at our game.

Cap tip to Marcie, who played her first game at 2nd base, and did great, including at least 2 put outs, and one hard hit ball that she was able to knock down and keep in front of her.  She also put up with the entire infield at various times trying to explain all the nuances of the position, and why we kept moving her around and why throwing to first (or second) was the right move in this particular situation...

The score was uneven for the first half, 3-1, then 4-1 homers.  Once we knocked Powell out (or he quit pitching) we started the long climb back.  We managed to take the lead 5-4 in the latter part of the game, and then the homers tied it up at 5.

We finished the 9th that way, and had just enough daylight to squeeze one more in, but the tie remained and we all won.

* A real even game, with solid defense on both sides.

* Catching, in particular, was awesome, Mike N. caught the whole game for homers and Nick W.,  Gaspar, Don for the visitors.

* Anna was back from her calf strain, and played a solid 1st base.

* Gaspar had a textbook Gaspar hit, and scored our first run

* We call shenanigans on Powell after he actually backtracked to impede Tony's view of a groundball at SS.  Tony still made the play.

* Marcie was cheated out of a hit, after Elon fell off the bag fielding a throw at 1st, we all called bullshit.

* One inning of shadows between mound and plate.

* Don made a couple of nice, and needed catches in center.

* Powell almost broke me in my first inning of pitching, he fouled at least 7 pitches, before flying out to deep center.

* Tony pitched and rolled over first, and we all held our breath for a second.  He was fine.

* Mike N was blocking all day, and also made a great foul out catch on the run

* Mike Lynch was lights out at 3rd

* I think I fielded at least 3-4 comebackers

* Alejandro showed up as we were pulling the bases, bummer.

Great game, thanks everyone who showed up!

This is so fun. Thanks for taking the time

In New World, there are many players who want to buy New World Coins to strengthen themselves.