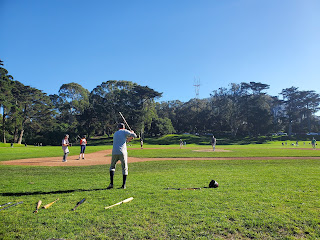 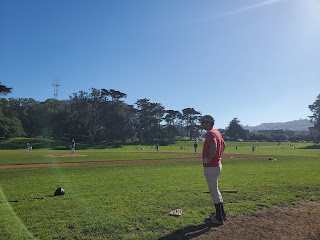 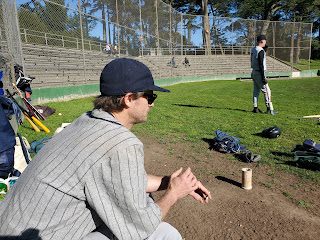 What a great time of year for baseball—winter in SF!  It borders on creepy how nice the weather can be.  The warm sun, the smell of the ocean, just fantastic.  We had 17 players out, almost a full squad. We learned later that Marcie had been unable to find parking, bummer!  Nick W. started for the homers, and Satch for the visitors, taking a page from unmentionables and being late, and then inserting himself in as the starter.  At least I didn't get my innings in and then leave....

The visitors struck for an early 2-0 lead, and that seemed ample for us through the bulk of the game.  We had a secret weapon, Urano, who was hoovering up the balls at SS, and making the outs.  Our defense was rock solid the whole game, and while we didn't ever complete a double play, we had many opportunities and always got one out.  I will take that any day.

Nick gave way to Sonny and we scored a few more and then a few more after that.  The homers were stymied a bit by the live movement I had on the ball.  I wish I could say how or why, but it was working for me.  Except the knuckleball, which was a disaster.  The curve, when thrown properly, had real bite and the changeup had some late movement as well.  Before I hurt my arm patting myself on the back, I will say that I only had one K, so it was my defense that was doing the hard work.

The homers got into the scoring in the middle innings with several loud hits in a row.  Mike Lynch in particular was hammering the ball, as well as fielding rockets at 3rd.  We managed to stem the tide of scoring, with the bases loaded, but the game was 5-3, which is nowhere near safe in the MBC.

Sean took over for me after 6 innings, and by all accounts, he has been lights out for the last couple of weeks.  This week proved no exception, he threw a first-pitch strike to every batter he faced, and all of his pitches were working.  He sealed the deal with a dominating strikeout to finish the game.  The homers did not have a chance.

* James hit at least 3 line drives to left, one of which Mike caught, and one that would have taken his head off if he wasn't paying attention

* Bob made a nice catch in left, on the move

* Don made a catch in foul territory to get out a batter I really didn't want to face anymore, hooray!

* Urano hit a round tripper—the hard way—and was almost nabbed at the plate. Nick W would say it was not almost....

* Tony Rojas had a long RBI double to right field that James almost tracked down, covering for the other team

* Anna had a couple of hits, an RBI, and played a great 1st base

* New guy Zach is an outstanding fielder and a potent bat.

* Thanks to Bob, Nick W., and Greg for catching

* The try to throw out the runner at first from the outfield gambit failed twice, and both times not instigated by James!  He showed tremendous self control

* Mike Lynch made several showy plays at the hot corner

* Lattig and Zach collided in a weird ground ball play, that sort of looked a bit like this infamous play.  Luckily everyone was alright, and the collision was unintentional...

* Lynch with several smoked balls to the right side

* There may be a piece in 48 Hills soon on our little game, so keep your eyes open.